At some point in their enjoyment of the hobby, many players and game-masters (GMs) alike become skeptical of the rationale for doling out experience points (XP). Does rewarding genre cliches like looting treasures, bonding with allies, fulfilling character arcs, aping moral lessons, or slaughtering diverse dungeon denizens really make for better play? Is the whole thing just a demeaning display of arbitrary power? What might be revealed if the players acted as their own judge and benefactor?

Everyone has an opinion, and you know what they say about those. Why not do an experiment and find out for yourself? In Headless XP, the GM unclenches a bit and lets each player think up three highlights from their last session as their XP awards. These will usually be things their own character did, like solving a puzzle or defeating a foe. They can also be things someone else’s character did - which does not prevent that player from using it as their own XP in turn! They can even be NPC actions or in-game events they found compelling. There are really no restrictions on what earns XP as long as it pertains to the game session.

To use this in games with “levels,” advance when you gather as much XP as the next level. Other XP schemes might require adjustments like adding bonuses or multiplying the XP. You may opt for two highlights for a short game and four for a very long one. Try to keep it around three however: offer too few chances and it can feel restrictive, offer too many and the most loquacious players will dominate the awards.

This is a fun experiment, but it can become your preferred method. Headless XP shifts the nature of XP from reward to a diagnostic. Each highlight adds to the understanding of what the players consider fun and interesting. Ideally, players who felt tied by genre cliches are freed to act on their own creative motivations. On the other hand, you might ask “what if the player thinks a disruptive and obnoxious action is worth the reward?” In that case, the advantage is that it is all out in the open now and can be discussed by the group. Likewise, “What if a player has a hard time coming up with anything?” This may reveal that they are underserved by the game or just need some encouraging ideas from other players.

Give it a try, you have nothing to lose by the experience…

This is a one page cc-by 4.0 submission for the Tech Jam. Check them all out!

This text is also the entirety of the method, downloading the pdf gets you a fancier version with some hand-drawn art. Please show support with money and/or a 5-star rating.

In order to download this game you must purchase it at or above the minimum price of $1 USD. You will get access to the following files: 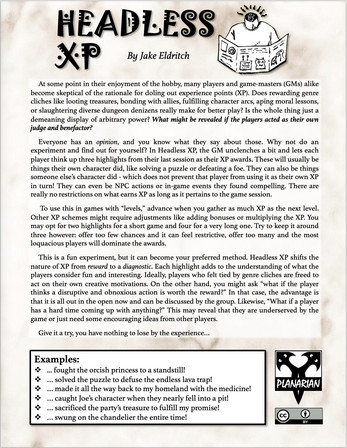